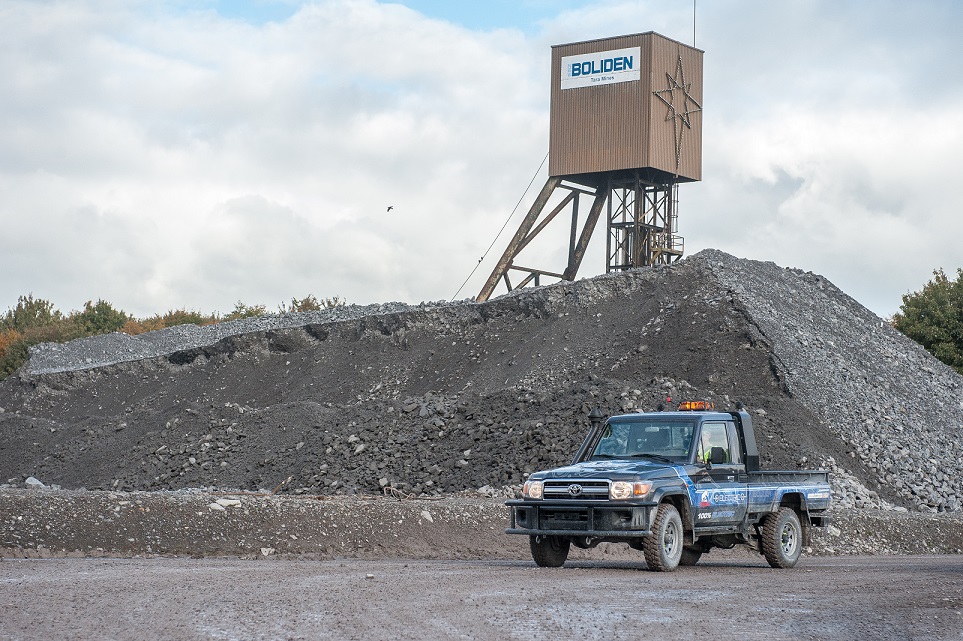 The first real world test of the TEMBO 4x4 e-LV was held early October 2016 at Boliden / Tara Mines. ‘You can do a lot of development, but the real test is to take it underground,’ says Martin Bowden, mobile equipment foreman of Boliden / Tara Mines. As a meeting in his workshop last year sparked the idea for the vehicle, it is only logical to have the first field test here, in Navan, Ireland.
The TEMBO 4x4 e-LV was driven up and down the mine for almost a week, with carte blanche for the miners to use it as they saw fit. ‘Before the test we fitted sensors everywhere on the vehicle, to collect as much data as possible.’ Frank Daams of FD 4x4 Centre joined the test.

Boliden / Tara Mines is an underground zinc/led mine going almost 1000m deep, with long tunnels in a rocky soil. ‘One of the main things we were looking for in this test is the ability of the vehicle to cope with the steep descents and long climbs,’ says Brian McKenna, a man with decades of underground experience. ‘So the first thing we did was take it down to the bottom of the mine and go back up in a straight line.’ It’s the benchmark in this mine - and almost two hours of rough driving. With the radio operator announcing the descent of the TEMBO 4x4 e-LV into the mine, all staff was watching the vehicle. ‘Immediately we were surprised with the engine braking, which was on par with the normal Land Cruiser,’ says Brian. ‘Going down we started little over 75% battery, and when we reached the bottom it had actually
charged several percent!’ The ability of the vehicle to regenerate energy using the engine brake makes sense in this mine and keeps the vehicle under control during the long descents.

Ready for the roughest conditions
Getting down deeper and deeper into the mine the tunnels become smaller, the corridors narrower and the corners more tight. Here the TEMBO 4x4 e-LV shines, with torque readily available due to the strong electric motor and the big battery. ‘Climbing back out of the mine was no issue at all, it has more than enough power for even the steepest sections!’ Brian pushed the vehicle on the way up, and with little power restriction on this prototype it was impossible to keep up in a normal diesel model. ‘I am well impressed with the vehicle,’ Brian says, arriving at the surface with more than 50% charge left in the battery. ‘You get used to it quickly. It is responsive, smooth and doesn’t let go on the steep climbs.’ Paul Fitzgerald agrees, ‘It is an exciting vehicle and fit for purpose. For our situation the engine breaking could be increased for extra control. That might charge it even more on the way down.
Currently we easily can run a full shift on one charge, making it ready for use right away.’ With 1% of battery per kilometer in the toughest conditions 80-100 km is real world use. Driving unloaded or on flat surfaces sees a usable 150 km range. After use, it charges in less than two hours on 380v/32a back to full, ready for the next shift.

The next step for mining
‘We believe this vehicle is the next step for those companies who wish to reduce emissions, fuel and maintenance costs, both in underground and open air mining,’ says Frank Daams of FD 4x4 Centre.
‘As we have worked hard to create a reliable and ‘fit for purpose’ vehicle, we are delighted with the opportunity offered by Boliden / Tara Mines to do the first real world test at their mine in Navan, Ireland. The car is almost ready for production, and for us this is an excellent chance to see how the car performs in a real world situation’.

The team is proud to see all smiles and no faults on the vehicle after one week of testing. ‘We go home with a lot of new ideas,’ says Frank. ‘Many small things that you only learn when you start using the car, and that we are able to add to this and to the next vehicles. We have already sold the first batch of vehicles and after this week we are even more confident about the quality of the final product!’