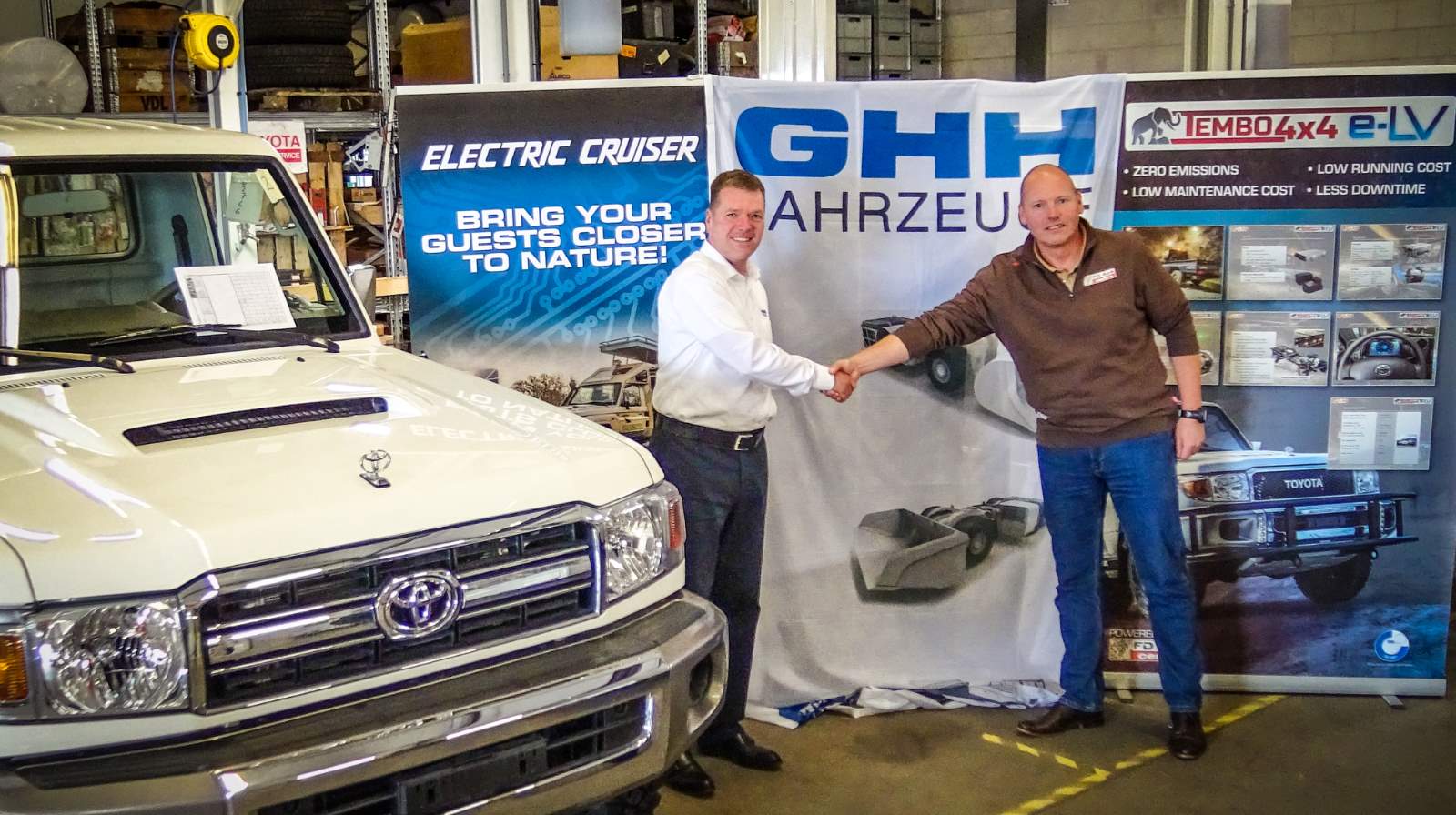 We are pleased to announce that we extended our global sales & service network with signing a distributorship agreement with GHH Fahrzeuge GmbH for the Tembo 4x4 e-LV 100% electric light vehicles. The Tembo 4x4 e-LV is a 100% battery powered light duty vehicle based on the Toyota Land Cruiser 70 Series & Toyota Hilux which are the most common used light vehicles in mining, worldwide. GHH Fahrzeuge will be responsible for all enquiries & sales, as well as all technical assistance and support via their impressive global network with branches in Germany, Turkey, Greece, Russia, CIS, India, USA, Mexico, Chile, Latin America, New Zealand, South Africa, Botswana, Mozambique, Namibia, Tanzania, Zambia, Zimbabwe.

Electric off-road vehicles (not only) for mining and tunnelling

The "green" revolution can no longer be stopped, not in the highly competitive mining and tunnelling industry anyway: load haul dumpers (LHDs) are already removing and reducing emissions through battery, tethered electric and stage V engines, and now it's time for light duty vehicles in the mining industry.

Automotive manufacturers have impressively demonstrated in road passenger cars that switching from combustion engines to electric motors and batteries not only works, but is also very cost effective and environmentally friendly. However, hardly any manufacturer offers "real" off-road vehicles for productive use.

Health & safety and reduction of gaseous emissions are one of the biggest challenges faced in the underground mining industry today, especially the diesel particulate matter and resultant carcinogenic effects which expose the underground miners to serious health risks. The days of diesel-powered vehicles is reducing at a rapid rate, especially where light duty vehicles are concerned, as these are the most cost effective to change out.

Focus on costs and health

Because light commercial vehicles in particular can be replaced comparatively quickly and cost-effectively, they are currently the focus of attention for mines around the globe.

Tembo 4x4 e-LV is considered the pioneer: The Dutch supplier has been on the market with the Electric Cruiser since 2016 and the Electric HLX since 2018. These vehicles are the most mature of all because they are based on the diesel Toyota Land Cruiser and Hilux models. Both are considered to be the most frequently used vehicles in their class in mines worldwide. Tembo 4x4 e-LV extensively converts the Toyotas, and equips them with electric motor and battery. Some vehicles are already running in Germany, Canada, Ireland, Sweden and Australia. Their operators are positive about using them: Other advantages include the low direct operating costs, higher reliability and reduced underground mining ventilation costs.

GHH, the machine manufacturer, has discovered this potential and has made major inroads: since September 2019, the GHH Group have included the electric off-road light duty vehicles to their product offering portfolio and in their worldwide sales and service program. The vehicles will now be offered in Germany, Turkey, Greece, Russia, India, the USA, Mexico, Chile, New Zealand, South Africa, Botswana, Mozambique, Namibia, Tanzania, Zambia, Zimbabwe, the CIS states and Latin America. A considerable step forward for the industry.

GHH has over 50 years of experience in the production of robust and safe vehicles for mining and tunnelling in hard and soft rock, including load haul dumpers with payloads up to 21 tonnes and dump trucks up to 35 tonnes. They are designed for low profile, narrow vein and mass mining underground operating environments and are used worldwide. GHH is part of the Schmitz Kranz Group and thus one of the global market leaders, to which the drilling equipment specialist Mine Master also belongs.

The Tembo 4x4 e-LV’s are available as an all-wheel drive in several versions, all based on the Toyota 70 and Hilux series. The vehicles are equipped with a 65 kW electric motor with 250 Nm torque. The temperature-controlled, modular and exchangeable battery provides a range of 80 to 100 km in proven underground use. It is designed for a service life of 15 years or 8,000 charging cycles (80 percent DoD) and charges from 20 to 80 percent in 2.5 hours. An external infrastructure is not required; a 15 kW charger sits on board. The vehicle reaches a maximum speed of 80 km/h and can negotiate inclines of up to 45 degrees. For more information see Tembo4x4-elv.com and GHH-Fahrzeuge.com on the Internet.